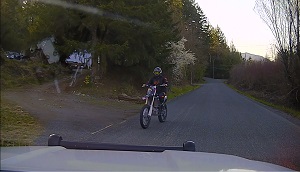 The Nanaimo RCMP is asking for the public’s assistance in identifying the rider of a dirt bike who failed to stop for police. The incident occurred at approximately 6 pm on Saturday April 10, 2021, near the intersection of Nanaimo River Road and White Rapids Road. (picture of bike and rider attached)

The officer involved was parked roadside when he saw the bike turning right onto White Rapids Road and ne noted that the bike did not have a license plate attached. The officer followed the bike for a short distance until such time the bike sped off. Approximately 30 seconds later, the same bike approached but was now going in the opposite direction. As the bike got closer, the officer could see that the rider was stunting, meaning he was driving with only one wheel on the road. The officer activated his emergency equipment and partially blocked the road in attempt to get the rider to stop however, the rider simply sped up and drove off.

Due to the risk to the public and the rider, the officer did not attempt to stop the bike and allowed it to carry on. It is unknown if the rider is man or women as the rider was wearing a helmet with a visor. One noticeable feature of the bike is that it had gold coloured shocks.