An early morning patrol in North Vancouver put the brakes on a would-be catalytic converter theft.

At approximately 3:00 a.m. on Tuesday, July 6, 2021, a North Vancouver RCMP officer was conducting a routine patrol when he noticed a would-be thief on his back underneath a parked and unoccupied minivan. He also noticed that the thief has left his car running beside him, with the driver’s side door open. As the officer approached him, the would-be thief attempted to get in his car and flee the scene, but was quickly apprehended without incident.

This is a great example of pro-active police work, said Staff Sergeant Doug Trousdell, A stolen catalytic converter causes a lot of expense and aggravation for the owner of the vehicle, but more importantly, when a thief cuts away a piece of a vehicle, there is a real risk of making the vehicle unsafe. The unsuspecting owner might start driving, not knowing their fuel line or brakes have been compromised.

What is a catalytic converter? And why would someone steal one?

As part of a car's exhaust system, a catalytic converter converts many of a vehicle's more harmful exhaust pollutants into less harmful emissions. 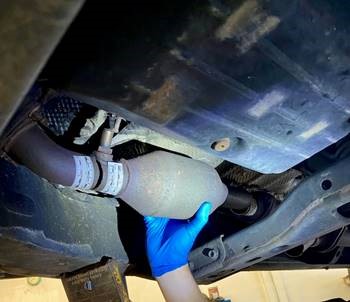 Someone might steal one for its resale value, but more likely a thief will sell it to a recycling facility for the small amount of valuable metal it contains. A new catalytic converter costs between $100 and $200, but having one professionally installed will add hundreds of dollars to the bill.

Here are a few tips you can follow to prevent theft of your catalytic converter:

• Park in your home garage, if possible
• Use motion sensing exterior house lights if you park in your driveway
• Park in a well-lit area
• Keep a watchful eye in your neighbourhood and report anything that seems suspicious.

Anyone who thinks they may have witnessed a catalytic converter theft, or who may have information about someone committing these thefts, is asked to:

Metro Vancouver Crime Stoppers will pay a reward of up to $2,000 for information leading to the arrest of a criminal or recovery of stolen property.