West Van PD Cst. Kevin Goodmurphy was walking his family dog, "Abbey", around 5:00 a.m. Wednesday morning in North Van when he spotted something out of place near his home. "Two people pulling a red wagon full of property in a residential neighbourhood at 5 in the morning? To me, it was the definition of 'out of place'," said Goodmurphy. He called North Vancouver RCMP on 9-1-1, and reported what he was seeing. 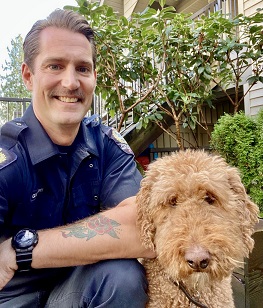 "Just after 5:00 a.m., a patrol officer was dispatched," said Sgt. Peter DeVries of the north Vancouver RCMP. By the time the officer arrived, the pair had stored the wagon in a bush, he said. "While patrolling the area, the officer located two people, one male and one female, matching the descriptions provided by Cst. Goodmurphy." The pair were riding two high end bicycles when they were stopped by the officer. At least one of the bicycles was later discovered to have been stolen during a burglary in the neighbourhood a few hours earlier. A 31-year-old man was arrested and held on an outstanding warrant, and charges are being considered for the other offenses.

"Cst. Goodmurphy wasn't in uniform, so he wasn't equipped to safely deal with a pair of burglars the way he would be while on duty," said Sgt. DeVries. "He did exactly what we ask everyone in the community to do when they see something suspicious. He observed and reported what he saw, and he stayed safe."