The North Vancouver RCMP is looking for the driver of a brown pick-up truck with a camper that caused a series of collisions early this morning.

On Monday, February 10th, just after 4am, a North Vancouver resident in the 200 block of West 25th street was woken up by a pick-up truck driving over his lawn. When the homeowner went outside, the driver of the truck struck him in the arm with a metal bar, then drove off. North Vancouver RCMP responded and began a hunt for the truck, which was described as a white and light brown, older model pick-up truck with a camper.

It didn’t take long to find other signs of damage. The same truck appears to have been in a collision with a taxi, a parked car, and another motorist in the area of 29th and Lonsdale. It also struck several signs and did other property damage.

At 5:30am, a patrolling officer noticed that the gate at Wagg Creek Park appeared to have been rammed. Police located the abandoned truck on the sports field. The driver had fled the scene. Aided by a police dog, RCMP officers searched the trail system, but so far the driver has not been caught. The truck has been secured and is being examined for forensic evidence. 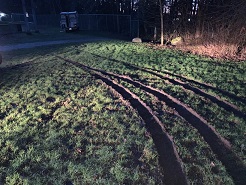 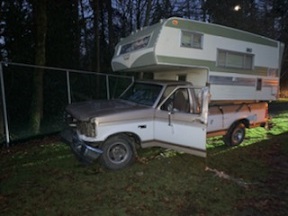 Reports are still coming in of damage caused by this truck. The North Vancouver RCMP is hoping to speak with anyone who might have seen the truck early this morning, or who noticed damage to their property that might be related. It would be especially helpful if anyone has video of the truck or driver.