Drugs and ammunition were seized and a man was arrested as part of a Targeted Enforcement Unit (TEU) investigation into street-level crime.

On Aug. 4, 2021 around 3 p.m., members of the Kamloops RCMP Detachment’s TEU were operating a covert investigation in response to concerns about drug use and crime in the Yew Street area. While conducting surveillance, they observed what appeared to be a drug deal. A 30-year-old Kamloops man, well known to police, was arrested. 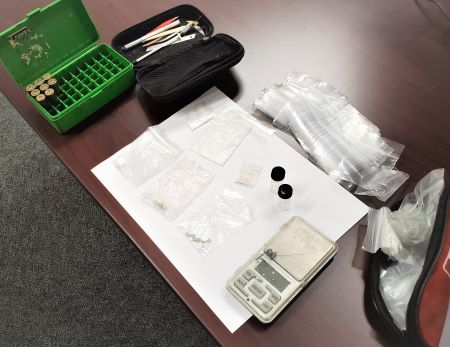 Suspected illegal drugs, packaging, and bullets, were seized on scene. The man was released, pending the investigation’s conclusion and subsequent charge recommendation related to drug trafficking.

Today’s arrest was part of our ongoing efforts to supress street-level crime in pockets of the community where residents have voiced their concerns about what they’re experiencing, said Kamloops RCMP Inspector Jeff Pelley, Officer in Charge of Operations.

Anyone who witnessed anything, has surveillance, or information that may be helpful to this investigation is asked to please contact the Kamloops RCMP at 250-828-3000 and reference file 2021-26869.