Two men and a woman are in police custody following a commercial robbery that led to a vehicle on fire in Riverside Park.

On Tuesday Aug. 3, around 10:42 a.m., Kamloops RCMP responded to a report of a robbery at a commercial location on the 1300-block of Battle Street. Frontline officers received a description of a suspect vehicle, a blue van, reported as stolen. 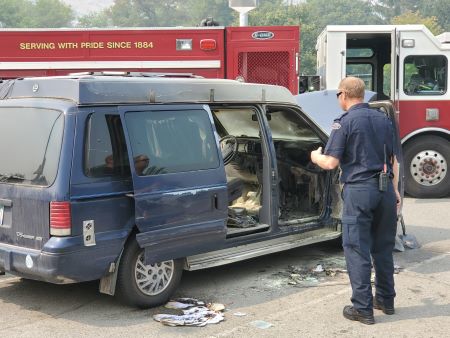 The van hit multiple vehicles while fleeing the scene.

Shortly after, the vehicle was located on fire in Riverside Park. Kamloops Fire and Rescue attended to help extinguish the flames.

Two suspects were located near the washrooms and taken into custody, while a third was arrested soon after near the Overlander Bridge.

Three people known to police remain in custody as the investigation continues. No further information is available at this time.

If you witnessed anything related to this investigation and have not yet spoken with police, please contact the Kamloops RCMP at 250-828-3000 and reference file number 2021-26688.