After enforcement concluded last night on August 10th, approximately 30 people rushed towards the officers manning an access control point that was established at one of the encampments in the Granite Mainline Forest Service Road area. A man attempted to climb a tripod structure and subsequently fell, briefly knocking himself unconscious. The man was assessed and transported by Emergency Health Services out of the area. The group stopped their actions and no arrests were made.

Police enforcement of the BC Supreme Court injunction order in the Fairy Creek Watershed area continued today, on August 11, 2021 in the same area of the Granite Mainline Forest Service Road. 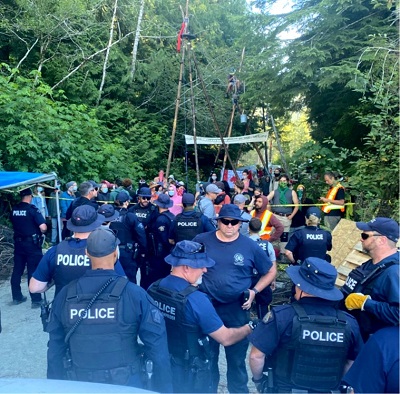 A total of 17 individuals were arrested today; all of whom for breaching the injunction (contempt of court) and 1 individual was also charged with obstruction. 16 were processed and released in Lake Cowichan and the 1 individual also facing an obstruction charge has been held for a court appearance.

Officers also spent the day removing tripod structures, locking devices, road obstructions and consolidating massive amounts of garbage left at various abandoned protest camps and in the area that enforcement has been focused in this week. 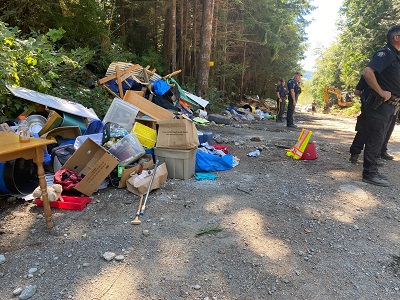 Larger image of garbage at the side of the road 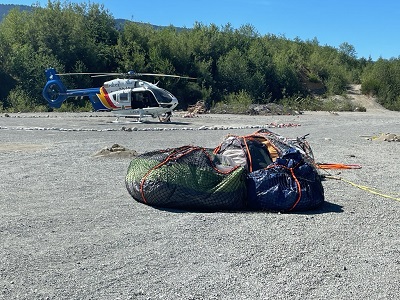 Larger image of garbage in a net brought out by helicopter 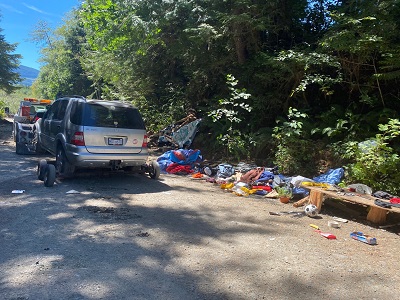 Larger image of vehicle being towed and garbage

Since enforcement began, the RCMP have now arrested 597 individuals; at least 39 of whom were previously arrested with a combined total of 96 times. A more accurate tally of repeat offenders is still pending. Of the total arrested, 437 were for breaching the injunction (contempt of court), 132 were for obstruction, 13 were for mischief, 6 were for breaching their release conditions, 4 were for assaulting a police officer, 2 were for failing to comply with a court order, 1 for counselling to resist arrest, 1 for causing a disturbance, and 1 wanted Canada-wide on warrants issued by Canada Border Services Agency (CBSA).