Both victims were transported to hospital. Mr. Gianis has since been treated and released. The second victim remains in hospital with life-threatening injuries.

The area was cordoned off for investigation, and during that time an unexploded improvised explosive device was located. The RCMP Explosives Disposal Unit attended the following day and safely detonated the device at a secondary location.

We can now confirm that this was viable explosive. Based on our examination, this device had the potential to cause significant damage to property and seriously injure members of the public that evening, says Inspector Beth McAndie of the Kelowna RCMP. This device marks a dramatic escalation in violence and put innocent members of our community in real danger. This is unacceptable to us, and we are doing everything in our power to identify the parties involved in this incident.

The initial investigation has resulted in the identification of video of a suspect allegedly fleeing the scene after the shooting occurred.

We are releasing the video at the earliest opportunity in the hopes that someone from the community recognizes the clothing or distinctive gait of this person, says Cpl. Jocelyn Noseworthy. If you believe you know who this suspect is, we ask you to do the right thing and identify them to us.

The suspect was seen fleeing the area in a light coloured SUV. As part of the ongoing investigation, Kelowna RCMP is asking for any dash camera footage from vehicles driving on Pandosy Street from KLO Road Harvey Avenue between the hours of 6:20 p.m. and 7:10 p.m. on July 31. 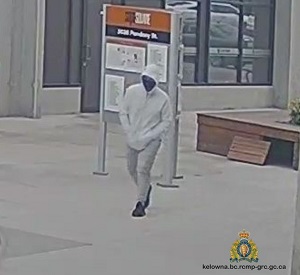 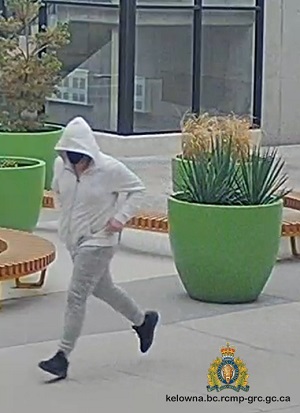