Shiprider responds to mayday for a fire on a cabin cruiser

A BC RCMP Federal Shiprider crew out of Victoria blew regular response times out of the water this week after receiving a distress call from a nearby vessel.

On June 24, 2021, the crew of a Shiprider vessel overheard a mayday broadcast on the Coast Guard radio channels of an engine room fire on a cabin cruiser near Ogden Point. The crew happened to be in the area and arrived within a minute of hearing the call for assistance. The four passengers aboard the 36-foot Grand Banks were transferred to the RCMP vessel while the owner worked to stop the smoke and ventilate the craft. To prevent it from grounding, Shiprider began to tow the malfunctioning boat toward the entrance to Victoria Harbour. The Canadian Coast Guard assumed tow of the vessel when they arrived soon after. Shiprider transported the passengers safely to Ships Point in the inner harbour.

The water can be extremely unforgiving to a stranded or malfunctioning vessel and it’s very important for the captain to be well-versed in all safety procedures, as was seen in this case, said Staff Sergeant Sean Powell, in charge of Shiprider in BC. Fortunately, our crew was nearby, with the Coast Guard not too far away, and neither the vessel nor its occupants were overcome. 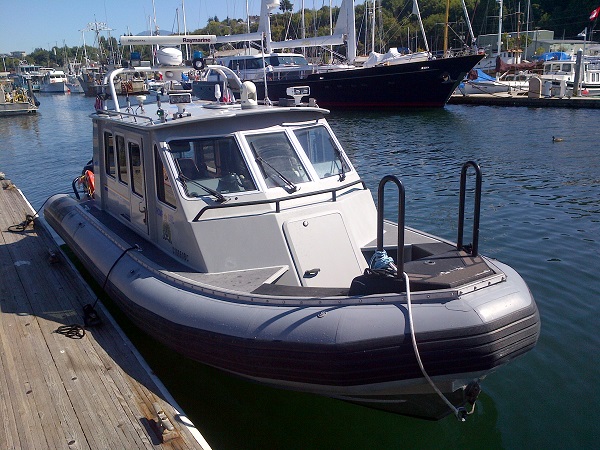 The owner managed to extinguish the source of the smoke and none of the individuals on the boat required medical attention.

The BC RCMP Federal Shiprider program is focused on cross-border criminality but also works with other Canadian agencies to investigate criminal activity or promote maritime safety. To fulfil its primary mandate, Shiprider works closely with the US Coast Guard, often deploying vessels jointly crewed by specially trained and cross-designated Canadian and US law enforcement officers to enforce the law on both sides of the border.