BC Highway Patrol officers perform rescue of a different sort

In the late evening hours of September 2020, an officer with BC Highway Patrol came across an owl on Highway 7 near Ruby Creek. The owl appeared injured and, with the assistance of a second BCHP officer and a member from Hope RCMP who attended the scene with a dog kennel and a blanket, the owl was coaxed into the kennel and safely transported to Hope Detachment.

A volunteer from the Orphaned Wildlife Rehabilitation Society (OWL) in Delta attended Hope Detachment to bring the owl to the rehabilitation facility. In February 2021, the OWL Society contacted the officer to report that the Barred Owl had recovered from its injury (a broken wing, possibly from being struck by a passing vehicle). The rehabilitation facility wished to release the owl into the area in which it was found. 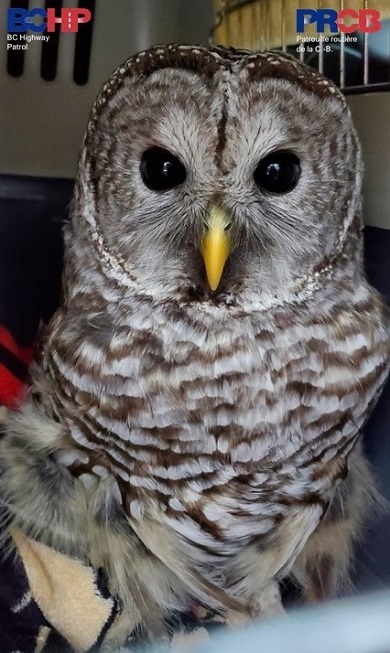 The three officers involved in the rescue, along with their families and volunteers from the OWL Society returned to an undisclosed location near the rescue site and set the owl free into its natural habitat, where it took flight like it was never injured.

This was a truly unique experience and it was an honour to be the person to release the owl back into the wild, states Constable Brian Woelders of BC Highway Patrol in Chilliwack. I am happy that our families were able to witness this, too, and I want to thank the OWL Society for involving us with the release. It was a hoot!

BC Highway Patrol wishes to thank the officer from Hope Detachment for his assistance as well as the staff and volunteers at the OWL Society for the valuable work they do rehabilitating injured wildlife.