Thicket of brambles no sweat for PSD Hannie

A 40-year-old man from Vancouver is facing a robbery charge after being tracked by a police service dog through the Seymour area of North Vancouver on June 12, 2019. The man had been stopped by Superstore security for stealing various items when he brandished a knife and ran into a wooded area behind the supermarket.

Store security was able to give us a very good description of the suspect, said Sgt. DeVries of the North Vancouver RCMP. We were able to box the area in while we called for a police dog. A member of the Integrated Police Dog Services (IPDS) headed to the scene while officers watched for the suspect. While they were waiting, one of our officers spotted and detained a suspect who matched the description, said DeVries.

Meanwhile, back at the supermarket, PSD Hannie picked up a scent trail and started tracking, dragging her handler and frontline officers in her wake. Hannie was heading straight for a huge thicket of blackberry bushes, said DeVries. She was excited to plunge in, but I don’t think the officers felt quite the same way. 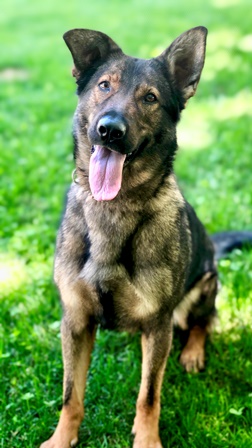 Much to their chagrin, Hannie remained doggedly fixated on the scent trail as she relentlessly pulled the officers through the brambles. Once on the other side, Hannie led them a few hundred metres farther, and right to the feet of the detained suspect. By the end of the ordeal, officers and suspect alike were covered in dozens of red scratches.

Police service dogs help us in so many ways, and they always do it with a smile, said DeVries. Not only can their tracking patterns be used as evidence in prosecutions, but they also remind us who the toughest cops are.